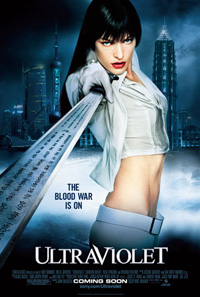 Ultraviolet
Director: Kurt Wimmer
Stars: 6.5
Score: 113.50
Review:
Ultraviolet is a futuristic-cyberpunk-vampire-dystopian film, and it’s great fun. This film, like Ćon Flux, is often panned as style over substance, with too many plot holes to take seriously, but if you don’t need your films to be pretentious in order to enjoy them, this one’s a winner.

The film takes place in 2078, following a pandemic known as hemoglophagia, a blood-borne disease that gives its victims super human abilities, along with elongated canine teeth, hence the media’s dubbing of hemophages as “vampires”. Unfortunately, they also have a 12 year countdown clock until they die. Milla Jovovich plays a hemophage nearing the end of her clock, working with a guerrilla group against the Arch-Ministry.

I won’t go into the entire plot, suffice it to say that those critics I mentioned are right in large part: the film really does have more style than substance, and plot contrivances like infection with a single tear. However, much of this may be the result of the meddlesome studio for cutting (reportedly) more than half an hour from the film’s runtime, and fundamentally changing the overall pacing and thrust of the film. The 88 minute theatrical cut was vastly improved in the 94 minute extended edition, so one can only hope that the elusive Director’s Cut which has yet to surface would be even better.

This film is definitely dystopian in nature and scope. While nothing is that well developed, and the plot is therefore weak, the ideas are there, and the style is certainly well established. This film is not a thinker, not by any stretch, but it’s fun to watch, with great production.