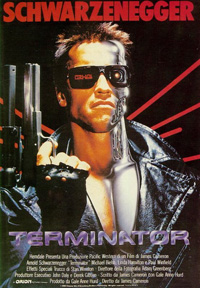 The Terminator
Director: James Cameron
Stars: 9.5
Score: 100.75
Review:
Such an absolute classic film, from back when James Cameron wasn’t an egomaniacal windbag, Arnold Schwarzenegger was badass, Michael Biehn was cool, and Linda Hamilton was (apparently) attractive. If you don’t know the basic plot synopsis of The Terminator, here goes: sometime in the future machines achieve sentience, machines launch preemptive nuclear strike against humans, death and destruction, human’s united behind leader John Connor, machines send Terminator cyborg back in time to kill Connor’s mother before he is even born. If you need more detail, shame on you, look it up yourself!

So how do you make a film about mankind’s losing war against sentient machines with a small budget? Throw in some time travel! After establishing what the potential dystopian future will look like if mankind continues on its current path, send a programmed killing machine back in time, and send a human soldier after it. Part of the brilliance of the film is that the time travel ends up bringing a whole cyclical determinism element into the film: the time travel is instigated in order to prevent John Connor’s birth, but is also necessary for John Connor to be born.

Even 26 years on, the film still resonates. Its an action/survival film, but underlying it all is a sense of the dangers of technological dependence. The human drive to constantly innovate and progress cannot be pursued blindly, without thought of the consequences of one false step.

Come to think of it, Michael Biehn was more of a badass than Arnie.