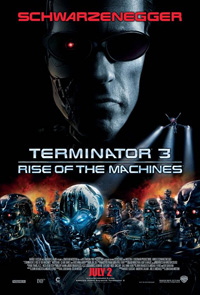 Terminator 3: Rise of the Machines
Director: Jonathan Mostow
Stars: 5.5
Score: 125.50
Review:
What can you say about the worst movie of a series? It may seem harsh, but it’s true. Now, to be fair, The Terminator and Terminator 2: Judgment day were both amazing, groundbreaking, classic films, so when the third installment fails to live up to the previous two, it doesn’t mean that it’s an awful movie, per se, just that it’s not as good.

Terminator 3 tries very hard, and it’s not all bad. The movie picks up 12 years after the last, with John Conner as a drifter who has dropped off the grid making it near impossible for SkyNet to track him from the future. In desperation, Skynet sends back a new T-X (Terminatrix) to take out all of Conner’s chief lieutenants, including Kater Brewster, his future wife. Coincidentally, John and Kate cross paths just as the T-X comes to find Kate, and the pair are rescued by another reprogrammed T-850 (Arnie model) sent back to protect Kate.

The time travel aspect of this Terminator film is once again dealt with quite well. The original Judgment Day was supposed to take place on August 29, 1997, but the destruction of Cyberdyne Systems in Terminator 2 effectively postponed Judgment Day. We’re told that it can not actually be avoided, just delayed. I don’t know that that’s true, but we can run with it at least. In the first Terminator film, if the Terminator had not been sent back in time, Kyle Reese would not have followed, and John Conner would not have been fathered. Sarah Conner would also not have been warned of impending doom and raised her son to be a guerilla soldier in a post-apocalyptic world. In the second film, without the T-1000, John and Sarah would not have reconnected. In this film, John and Kate were brought together, survived Judgment Day, and were in a position to organize the eventual resistance, all because of the T-X.

The film has good bones, but the execution is unfortunately somewhat weak. The CG is decent, but not that remarkable, and at times too obvious to be enjoyable. The dialogue, while passable, is the cheesiest of the series, trying to recreate the cultural touchstones of the previous films with duds like “Talk to the hand”. It makes me angry! On top of that, some of the series best recurring lines are blurred here, references are made, but the lines themselves aren’t used, which is just such a waste.

Overall, it’s not that bad, and besides, we get to see Judgment Day, but it is certainly the lesser of the four Terminator films to date. It’s bad, but I think that my favourite part of the film is actually the subtitle, Rise of the Machines, a phrase I’ve adopted to represent any sentient AI. My recommendation is to watch it as a part of a superb series, regardless of it’s lesser nature