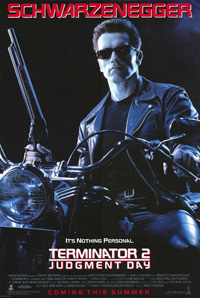 Terminator 2: Judgement Day
Director: James Cameron
Stars: 9.0
Score: 100.75
Review:
The second installment of the Terminator series is a feast for the eyes, and probably one of the best action films ever made. As far as dystopian films go, it’s all still off in the future, visible in certain scenes, but the bulk of the film takes place while future human resistance leader John Connor is just a snot-nosed kid.

This time, the Terminator sent back to kill Sarah and John is a shape-shifter, while their protector is a reprogrammed cyborg of the same series that had tried to kill Sarah all those years before. In the first film, the time travel angle is played with as Kyle Reese, John Connor’s lieutenant in the future, is sent back in time to protect Sarah Connor prior to John’s birth, and ends up fathering John. In this film, we learn that, though Sarah destroyed the Terminator in the first film, it is in fact the retrieved pieces of the cyborg technology found in the Cyberdyne factory that allows Cyberdyne to make such advances in cyborg AI technology in the first place. Cameron really seems to like this whole ‘but-for’ time travel angle, and it works here in a very deterministic kind of way.

As I said, this film is a special effects feast. It’s so fun to watch, even through the cheesy one liners that have become too famous for me to bother writing them down. Like the original film, the dystopian element is somewhat of a backdrop, as the vast majority of the action takes place in the contemporary world. However, unlike some films where the dystopian element is contemporaneous with the action, but not a focus of the film, in T2 the threat of the dystopian future is omnipresent and a seemingly inevitable outcome. Highly recommended.