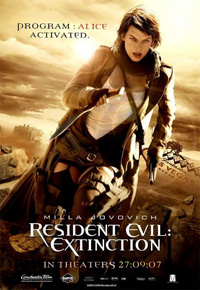 Resident Evil: Extinction
Director: Russell Mulcahy
Stars: 7.5
Score: 113.00
Review:
Resident Evil: Extinction is the third film in the series, and once again written by Paul W.S. Anderson. This chapter finds Alice traveling through the ruined landscape of Nevada, years after the disastrous events of Raccoon City. I know what you’re thinking, Nevada already looks like a blasted wasteland, but in this world, even Las Vegas is a ravaged, post-apocalyptic backdrop. Alice meets up with a convoy of other survivors and continues to battle the relentless zombie hordes, and other creatures infected by the T-Virus, including some Hitchcock-worthy crows.

Aside from trying to stay alive, Alice is trying to keep out of the hands of the Umbrella Corporation. In the meantime, she’s also discovering more about her self, and her own mental powers. The film is quite well done, the effects are top notch, and the story is less predictable than you might expect from a zombie flick.

This film works on several levels: as a zombie survival film, as a desolate post-apocalypse, and as a corporate totalitarian picture. I particularly like this installment because, unlike in the previous two films, it deals with the global effects of the T-Virus contagion, rather than the isolation of the Hive or Raccoon City. I definitely recommend this film, along with the rest of the series. Paul W.S. Anderson is a dystopian regular, and Milla Jovovich is great as always.