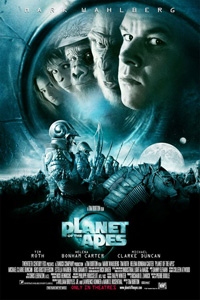 Planet of the Apes
Director: Tim Burton
Stars: 2.0
Score: 39.00
Review:
After thirty-five years, it must have seemed like the right time to remake one of the most heavily referenced sci-fi classic of all time. It’s really too bad that the movie ended up being so awful. It’s always amazing when you’ve got a great director (remember when Johnny Depp didn’t have to be in every single movie Tim Burton made?), and a whole whack of good or great actors.

To be fair, it’s not like it’s a poorly made film at all, it’s just got such a swiss cheese plot, it besmirches the good name of Planet of the Apes. That’s right, besmirches. The movie begins on a space station, experimenting with chimp pilots, when one gets sucked into some sort of wormhole. Mark Wahlberg loves his monkeys, so he goes after it, and gets sucked in himself. Shortly, Luke crashes into a swamp on Degobah…err, Markie Mark crash lands on an unknown planet. Apes speak, humans run wild, and so on and so forth. As it turns out, the space station followed, and following the laws of last in, first out, arrived at the planet many, many years earlier. The inhabitants of the space station, human and simian alike, formed the basis of civilization on this planet.

So, when the apes are riding around on horses, does that mean that there were horses on the ship too, or does this alien world just happen to have fully developed horses? Questions like this only get more awkward as the film progresses, particularly after Markie Mark leaves this funky bunch of apes and humans to travel back out to the wormhole. He crash lands in front of what appears to be the Lincoln Memorial, and is surrounded by apes wielding guns.

This gaping hole in logic also has another effect. If this all occurs on some distant planet, which ends up populated by the descendants of a small handful of interstellar travelers, then it isn’t really dystopian, because as far as we know, Earth is still just peachy. And if it’s a time travel thing, aside from the paradox created by changing the past and therefore eliminating the germinating event in the future, it’s not really about Earth’s crappy future, but instead an alternate reality, and again, not dystopian.

The Planet of the Apes belongs on this list for two reasons. First, because it is a remake of an actual dystopian film. Second, because Charleton Heston makes a cameo as Thade’s father, Zaius. Although, this cameo was spoiled by the implication that Thade is only two generations removed from the original muckraking primate from the space station. See it if you want, but don’t expect much.