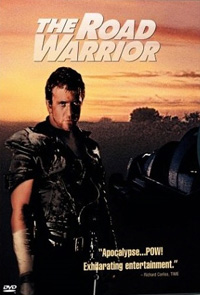 Mad Max 2: The Road Warrior
Director: George Miller
Stars: 9.5
Score: 87.00
Review:
The Road Warrior is one of those rare sequels that manages to distill everything good about the original, add more depth, and end up as an even better film. This one picks up with Mad Max as a drifter, wandering the nuclear wastelands of Australia in search of the only commodity in demand: gasoline.

In short order, Max becomes the reluctant protector of the inhabitants of a small community built around a small oil refinery. He battles a gang of post-apocalyptic bikers, and ultimately saves the day, violently. It’s a simple story, there are no complex plot twists, but it’s brilliantly conceived and stylistically well done. The biker gang has been a template for post-apocalyptic gear for the last three decades. Gibson actually only has 16 lines of dialogue in the whole film, similar to Arnold Schwarzenegger’s role in The Terminator.

Max is less of an anti-hero in this film than in the previous, as he is once again a protector, rather than simply an avenger. However, he is still a grim, dark, violent character, living in a brutal wasteland. The Road Warrior is a prototypical post-apocalyptic road film. It is an absolute classic dystopian story, that I highly recommend watching.