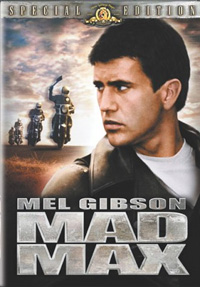 Mad Max
Director: George Miller
Stars: 8.5
Score: 79.00
Review:
Mad Max is such an important film for so many reasons, least of which I would say is the launching of Mel Gibson’s career. The film is set just a few short years into the future, as law and order have begun to crumble. Gibson plays Max Rockatansky (what a name, eh?), a cop struggling to hold on to what little bit of order he can. After his partner is burned to death, and his wife and child are run down in the middle of the road, Max gets mad, and goes mad.

The rest of the film follows Max as he embarks on his own vigilante crusade, hunting down the vicious biker gangs and anyone else who he feels deserves a bit of rough justice. The system at this point is broken, so Max takes the justice into his own hands, in a very brutal manner. Max leaves the last remaining vestiges if civilization behind as he ventures into the forbidden zones to pursue his hunt.

Mad Max is a grim, gritty film, that didn’t necessarily have a massive budget, or even a good sound mixer — necessitating a secondary American audio track — but the moral grounding stands up today. The film is about the dissolution of civil society, and the rise of crime, violence and anarchy in its place. Max is the prototypical anti-hero, the arm of justice adapting to an unjust world.

While I personally prefer the sequel, The Road Warrior, as the best of the trilogy, Mad Max is still a great dystopian film, and worth watching even if just as a background for the second film. I highly recommend the whole trilogy.