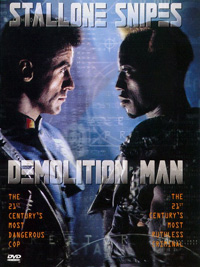 Fast forward 35 years and Snipes manages to escape during a parole hearing, thanks to kung-fu training and technical know-how implanted during his cryogenic reprogramming treatment. The current police force of San Angeles is incapable of dealing with violent criminals, as the world has become an idyllic and tame utopia. To catch a criminal from the past, they unfreeze the cop from the past. The pair do battle, Spartan becomes close with his wildcat partner, Sandra Bullock’s Lenina Huxley, discovers the sewer dwelling resistors to the idyllic facade of the new utopian world (lead by Denis Leary), and of course, wins the day.

Aside from the shootfightshootfight nature of the action film, it’s still a good watch. The film is constructed very well, with futuristic items actually looking futuristic (at the time). There’s also a nice tension between the utopian society and the struggle for freedom, between controlling your own destiny, and having it controlled for you. The future utopia has been scrubbed clean, in appearance, in language, even sex.

Problems with the film include the fact that it begins only four years from the time of release, dating it very, very quickly. It was hard to imagine in 1993 that in four years time Los Angeles could actually become a virtual no man’s land warzone. It’s also unclear whether this tightly controlled society is limited to Southern California, or if it stretches further. It doesn’t make sense that the area would be cordoned off, but who knows?

One of my favourite things about this film is actually retrospective. I first saw the film when I was thirteen, and had not yet read Brave New World. Years and years later, when I finally did read it, Lenina Huxley’s name finally clicked! Definitely dystopian, nice nod to Aldous Huxley, and a fun watch.