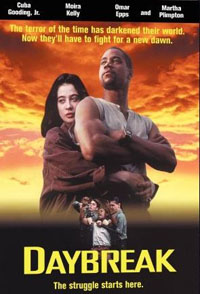 Daybreak
Director: Stephen Tolkin
Stars: 3.0
Score: 77.00
Review:
Several years after a virulent epidemic began to sweep the United States, order has been restored in a mildly fascist police state. Infection is spread through exchange of bodily fluids, and infected have about five years to live once they contract the nameless illness. The film opened well, with a desperate escape from quarantine, followed by a brutal streetside execution. The repressive regime, complete with Omar Epps and his squad of Home Guard brownshirts, has a lot of potential, but unfortunately the film only manages to limp on thereafter.Blue, Moira Kelly’s female protagonist, and Torch, Cuba Gooding Jr.’s male protagonist, travel through the rest of the film in a struggling love story, complete with two sex scenes which, though sexless, contain a lot of boob shots. The illness is never very well defined or addressed, though it appears to be a real, naturally occurring disease. The government may be totalitarian, and their acts of deception in portraying quarantine as a vacation resort in the hills as opposed to the reality of decrepit “hospitals” is certainly not nice, but maybe the idea of quarantine was necessary, we didn’t really see this plague at its height.After watching this movie, I’m even more impressed with the quality of programming that HBO manages to come up with now. Interestingly, two of the characters are portrayed by actors that would later go on to have supporting roles in Sex in the City. It’s not the worst film, but I wouldn’t recommend wasting time on it if you could be watching something else. Really, it’s for completists only. As a dystopian, it certainly does fit the bill, with the pandemic, the totalitarian government, and the the authorized goon squads, but it just isn’t executed well.