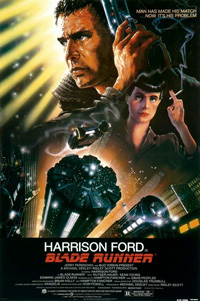 Blade Runner
Director: Ridley Scott
Stars: 9.5
Score: 98.50
Review:
Blade Runner is a masterpiece, the prototypical gritty future noir that would come in large part to define both the aesthetics of cyberpunk, consumerist, urban decay in a dystopian landscape. Ridley Scott’s adaptation of Philip K. Dick’s “Do Android’s Dream of Electric Sheep” was visual poetry, dealing with the themes of human worth, empathy, consumerism, greed, life, death and consciousness.

In a time of Indiana Jones and Han Solo (I love both franchises, so it’s not a knock), Harrison Ford’s portrayal of Rick Deckard stands apart. Deckard, the titular blade runner, must track down a group of 4 replicants, clones with limited lifespans, who have escaped from an offworld colony. Deckard struggles with questions of sentience and reality as he both hunts and interacts with replicants.

Blade Runner was well ahead of its time in visual cues, while also harking back as far as Metropolis in visual aspect and tenor. In a twisted sort of real-world hommage, the glittering dystopian cityscapes have become the inspiration for advertising ventures in the modern era. Blade Runner is by far one of the greatest films to grace this website, and I highly recommend watching it.

There’s much to be said about the various versions of the film released, and the differences between them, not only aesthetically, but in the overall message and meaning which can be ascribed to the film. This isn’t the place for that debate, but I may in the future get into it. Sufficed to say, this is an absolute classic, and if you haven’t seen it, you should. By this time, it is certainly dated, but not nearly so badly as many films become. Ridley Scott created a visual masterpiece, but the film wasn’t just about the effects, which is why it does stand up so well.