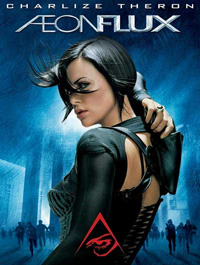 Ćon Flux
Director: Karyn Kusama
Stars: 6.5
Score: 153.50
Review:
Ćon Flux may just be the most dystopian film ever made, by my standards at least, and yet it gets slammed left, right and centre. A small caveat right at the get-go, at this writing I have not yet seen a single minute of the MTV cartoon on which the film is based. Overall, I can understand why people sometimes have a problem with this film. It’s great on style, great on premise, but the execution and the characters are completely flat. It’s got some great elements, but it just never really gels.

The film takes place four centuries in the future. The world has been ravaged by a virus, leaving only 5 million people alive, in the the last city, Bregna. The descendants of the scientists who developed the cure, the Goodchilds, rule Bregna with an iron fist. Unbeknownst to the population, the cure rendered the survivors incapable of reproducing, so all reproduction is handled through covert cloning.

In the midst of all this, Ćon Flux is an incredibly well trained assassin working with a rebel force seeking to unseat the Goodchilds. She begins to uncover things, and there’s some attempt to develop the characters, but style wins out over pretty much everything else. It isn’t so much that the acting is bad, it fits the stylization of the film, but there’s just not a lot of emotion beyond brooding written into the script.

I still think that this is a film worth watching, but maybe that’s because I’ve also seen things like Surf Nazis Must Die. I also just love that this film manages to pack so many different elements in: massive death toll, destruction, pandemic, totalitarian regime, mega-tech advancements, government approved murder. Watch it, just don’t expect it to trigger any deep thoughts.