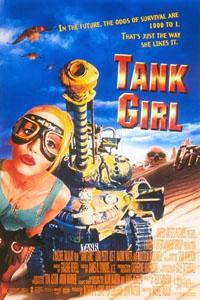 Tank Girl
Director: Rachel Talalay
Stars: 3.0
Score: 98.50
Review:
Tank Girl is based on a comic series that I must admit I have not yet read. I’ve heard that it’s a fun series, so it might be worth a look, but after watching this film, I’m not exactly rushing out to find a copy.

The background premise works well. The year is 2032, years after a comet strike shifting the planet’s climate, turning it into an arid wasteland where water is scarce, and it never rains. Control is brutally wielded by the Water and Power, umm, company? Oh, and then there’s the underground rebel group of kangaroo-human hybrids that fit right in with the goofy construction with comic book cut-aways. And a musical number? I just about stopped the DVD right then.

The big problem I have with the film is that it’s too childishly silly in it’s construction, particularly considering the sexual overtones. It could have been humourous without being ridiculous. Also, for a desolate wasteland, everything was remarkably clean, prisoners wore uniforms, and nobody really seemed desperate. Malcolm McDowell is always a great villain, and his inclusion was definitely appreciated. It’s also a great example of an early Naomi Watts. Unfortunately, the first image that comes to mind when I think of this film, is five men dressed up as kangaroos dancing around in a circle. Not cool. Worth watching only for completists, Malcolm McDowell fans, and people who like Naomi Watts as a brunette.