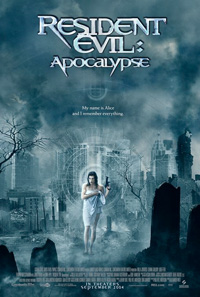 Resident Evil: Apocalypse
Director: Alexander Witt
Stars: 6.5
Score: 95.50
Review:
In this sequel, Alice awakes to find the Hive reopened, and Raccoon City ravaged by the spread of the T-Virus. Alice also discovers that she herself is a bio-genetically enhanced experiment of the Umbrella Corporation. Alice eventually comes to the aide of a clutch of survivors, battling zombies and other mutations in the walled off city.

Apocalypse is a good film, if not my favourite of the Resident Evil series. It lacks the complexity of the first film and the expanse of the third, but it is still a good film in its own right. It expands the scope of the original from the isolated confines of the Umbrella Corporation’s secret underground Hive compound to the broader setting of a quarantined Raccoon City.

This film is definitely worth watching as a part of the series, and has some great zombie sequences.