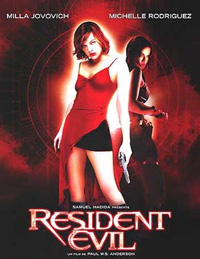 Resident Evil
Director: Paul W.S. Anderson
Stars: 6.5
Score: 78.00
Review:
Resident Evil is a great, fun, zombie sci-fi dystopian action thriller based on a video game. It may just be the best such movie of that category ever. Well, it’s a good movie at least. The film is largely based on the BioHazard/Resident Evil run of PC games, and stars the always wonderful to watch Milla Jovovich as the heroine, Alice. The film begins with a confused and disoriented Alice waking up, uncertain even of who she is. Throughout the film, as she battles to stay alive, she begins to piece together her own story.

Alice is essentially a sentinel, standing guard over a secret facility run by the Umbrella Corporation, a dystopian behemoth if ever there was one. The Umbrella Corporation promotes, amongst other things, products that will keep customers forever young. One of the side effects of their experimentation is of course zombies (of course). The living can become infected, but if they die, you’re still not done with them.

Once Alice is in the Hive (the underground installation), her job becomes survival and escape. It’s stylish, it’s ridiculous, and it’s fun. I didn’t play the games at all, so I can’t comment on how good/bad the movie is in relation to the world created by the games, but I know some gamers despaired. Gamers tend to despair at the drop of a hat though. Initially, I wasn’t too fond of the zombie angle, preferring the living infected of 28 Days Later et al to the brain-hungry undead of Romero lineage, but the detail of Umbrella Corporation, and the overall pandemic thrust of the film (and its sequels) certainly make up for the undead.

Overall, I recommend Resident Evil, and the sequels as well. As a set, they are solidly dystopian despite the faith-requiring pseudo-science of the zombie hordes.