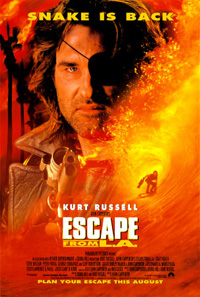 Escape from LA
Director: John Carpenter
Stars: 5.5
Score: 89.00
Review:
Escape from LA is an interesting sequel, in that it takes the practice of mirroring the original story to the extreme. Escape from LA is a fairly faithful reworking of the original story: ex-soldier, ex-con Snake Plissken is sent in to a prison island that used to be one of America’s preeminent cities (substituting Los Angeles for New York, this time around) in order to retrieve something of crucial value to the US government (a doomsday device, rather than the President), and because the government doesn’t trust him, they arrange for a time-delayed death, just to keep him honest (injected toxin taking the place of explosive charges).

Don’t get me wrong, however, Escape from LA is still a great film, more technologically advanced than its 15-year predecessor, but with the same kind of low-budget feel to it. Either film is dated by this point, and each deal with the anarchy and decay of tomorrow, against the backdrop of a heavily militarized US government and a war torn world. Snake’s ultimate actions call towards an end to mechanized warfare, but also towards a world of anarchy no longer confined to the prison islands of the USA.

Snake Plissken is one of those anti-heroes of the 1980s that must have seemed cool at the time, but seems incredibly silly in retrospect, with his eyepatch, big hair and deconstructionist wardrobe. The elements of the film somehow manage to once again work together, however, even the comic relief afforded by old bug eyes himself, Steve Buscemi.

Escape from LA is definitely not one of the better films ever made, nor even one of the better dystopian films, but as a sequel to the classic Escape from New York, it’s earned its place on a list of worthwhile watches. The soundtrack to the film is particularly good, and while that can sometimes be a copout, to identify the soundtrack as one of the leading elements of a film, here it helps direct the film almost as a tribute to the genre. Neither this film or the original can ever be accused of being deep, but there is a political and social message here, in a satirical way.