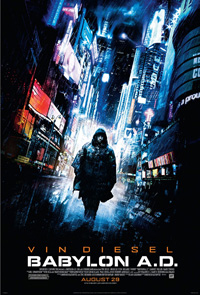 Babylon, A.D.
Director: Mathieu Kassovitz
Stars: 4.0
Score: 69.50
Review:
I finally saw Babylon, A.D. thanks to Netflix. Now, as a completist, I would still buy the film on DVD, but I’m thinking it would have to be in the $3 bin. The film follows Vin Diesel, a mercenary with the unfortunate name of Toorop as he seeks to transport a young woman from the desolate frontiers of Russia to the hallowed streets of New York City. The film is set in a decidedly dystopian future. The exact date is unknown, but 2017 is referred to in the past tense. The world of the future has been hit hard by war, tech is far advanced, and the hyper commercialism of New York City makes the Los Angeles of Blade Runner look almost quaint.

That was actually one of the highlights for me, the depiction of future New York, which I think was done very well. The tacky, over the top product placement, however, ruined a lot of the commercialism commentary for me, with Vin’s Zoo York shirts, and The North Face jackets. The Coke Zero airplane, ok, product placement and commentary at the same time, I can accept. But new, modern products that are currently hot and going through intensive ad pushes at the time make for all-too-obvious and blatant placement that personally pulls me out of the reality of the film.

The film is definitely dystopian, with themes of desolation, desperation and human manipulation of life fairly omnipresent. The backdrop to the film was fantastic, and some of the ideas that are mentioned in passing (second generation tiger clones, cyborgs, genetic manipulation) are compelling, but not expanded on. Why would they leave such fertile ground unexplored? Because it’s a Vin Diesel movie, which means that after a couple of minutes of talking, we’ve got to get some shooting, punching, exploding, or some combination of all three.

Part of the problem with this film is that it has such a great backdrop, and some really interesting plot points, but it’s squandered in favour of a base action film. Vin Diesel is a workhorse, he’ll say what you want him to say, and move where you want him to move, but he can’t act, at least not here. Every time he speaks, it pulls you out of the context of the film, and reminds you that this monosyllabic gorilla is fresh from the gym, and probably on his way back there right now. Let’s see, what else didn’t I like? Oh yes, the soundtracking done by the RZA. What’s wrong, ODB not available? Oh, right. In any event, I did not like. Maybe that’s just me, but I did not like.