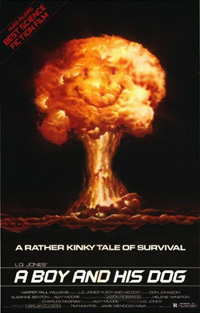 A Boy and His Dog
Director: L.Q. Jones
Stars: 6.5
Score: 99.50
Review:
A Boy and His Dog is definitely a classic. Based on the Harlan Ellison short story by the same name, the film tells the tale of a young man roaming the desolate wastes of a post-apocalyptic landscape, searching for food and women. Vic doesn’t make a very good hero, in fact he’s nearly as depraved as any of the other solo scavengers and gangs he comes across. Vic is accompanied by Blood, a telepathic mutt with human level intelligence, descendent of super-intelligent dogs bred before WWIV. And when I say that they’re searching for food and women, the ultimate goal is simply sex.

Vic ends up finding a woman, thanks to Blood, and corners her in order to rape her. He’s somewhat shocked when he doesn’t have to force her into bed, she’s actually quite willing. After they fight off a rival gang, Quilla June convinces Vic to join her in Topeka, an underground society where order is still maintained. Vic goes, leaving Blood behind. Once there, he realizes that he’s been brought as a stud, meant to share his genes with the ladies of Topeka, but not in any way he’ll enjoy. He eventually escapes, and takes Quilla June with him. They find Blood wounded, starving and near death, waiting for Vic at the entrance to Topeka. When faced with the choice between saving Blood and fleeing with Quilla June, Vic finally comes to realize what true love is. It’s a good thing Quilla June was with him when Vic found the starving Blood. She really hit the spot.

It’s a good film, if not quite as good as the short story, but then that’s often the case. I preferred the slightly more maniacal Quilla June in print to the only somewhat maniacal Quilla June of the film. What’s interesting is actually how such a bizarre premise actually becomes a really good story. The effects are certainly dated at this point, 35 years after the fact, but for the most part the film is so bare bones that it doesn’t act as a barrier for getting into the story. The indie-film look of the movie saves it from being quite as dated, but everything comes away feeling underbudgeted. The end could have been handled better, as could the scenes in Topeka, by staying truer to the original, but taken on their own they still work. Not the best film, but a great story.