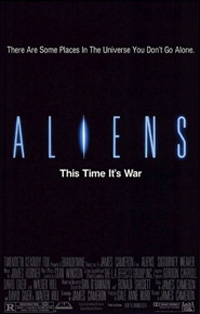 Aliens
Director: James Cameron
Stars: 8.5
Score: 29.00
Review:
Aliens is such a classic sci-fi film, with so much going for it, it’s really a shame that it doesn’t really qualify as dystopian. Like the original Alien, there’s definitely an important corporatist backdrop, sentient androids, and some hints towards a perhaps less-than-ideal planet Earth, but all of this takes a sever back seat to the main problem: the aliens!

In this sequel, Ripley’s escape pod from the first film is found…after drifting in space for many decades. In the meantime, the planet where the alien was picked up in the first film has been colonized, with predictable results. Ripley ends up back on the planet with a squad of Colonial Marines, packing heavy fire power, and not a lot of brains.

Aliens is without a doubt an action movie. Unfortunately there isn’t the same intricacy of alien set design as in the H.R. Giger designed first film, but it’s still visually quite well done. Bill Paxton plays the whiney loudmouth to a T, and Michael Biehn is fantastic as the only really practical marine. Ripley’s relationship with the young Newt is believable, Paul Reiser plays the perfect creep, and Lance Henrikson’s synthetic life form is played unsettlingly well.

While this film is not, on its own, a great example of a dystopian film, it’s nonetheless a great film. Even though the dystopian angle is only cursory, I certainly recommend it.